10 Facts about the Milky Way

10 Facts about the Milky Way 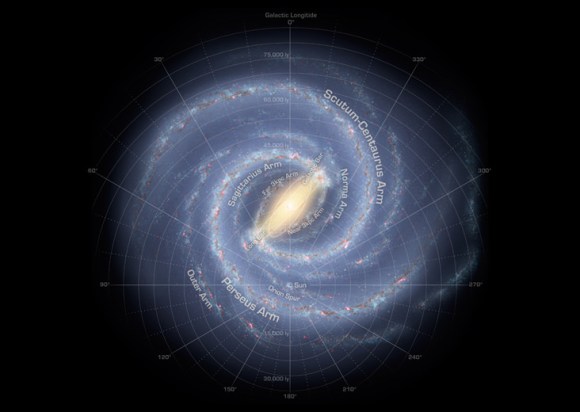 The Milky Way is a disk that measures about 120,000 light years across, with a central bulge that has a diameter of about 12,000 light years. The disk is not perfectly flat though, it is warped due to our neighboring galaxies Large and Small Magellanic clouds. These two galaxies have been pulling on the matter in our galaxy like a game of tug-of-war. 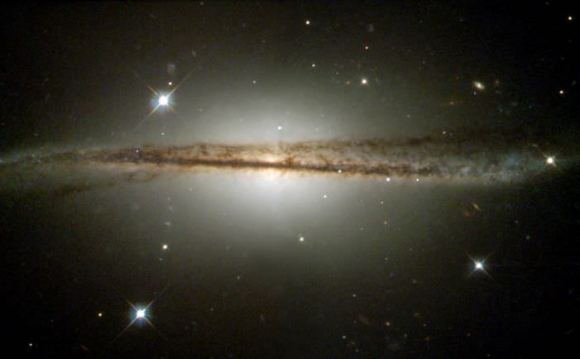 2. It has an invisible halo.

Our galaxy is made up of about 90% dark matter, matter that cannot be seen, and about 10% “luminous matter”, or matter that we can see with our eyes. This large quantity of dark matter causes an invisible halo that has been demonstrated by simulations of how the Milky Way spins. If the dark matter did not exist then the stars within the Milky Way would orbit much slower than has been observed.

The Milky Way is only a medium sized galaxy with an estimated 200 billion stars. The largest galaxy we know of is called IC 1101 and has over 100 trillion stars.

About 10-15% of the Milky Way’s visible matter is made of dust and gas, with the rest being stars. On a clear night, the dusty ring of the Milky Way can be seen in the night sky.

5. It was made from other galaxies.

In order for the Milky Way to achieve its current size and shape it has consumed other galaxies throughout its history. Our galaxy is currently consuming the Canis Major Dwarf Galaxy by adding the smaller galaxy’s stars to its own spiral.

Since we are located about 26,000 light years from the Milky Way’s center we cannot take pictures of the disk. Any representation that you have ever seen of our galaxy is either a different spiral galaxy or what an artist thinks it might look like.

7. There is a black hole at the center.

Like most larger galaxies, the Milky Way has a supermassive black hole at its center called Sagittarius A*. This black hole has an estimated diameter of 14 million miles, which does not include the disk of mass being drawn into it. This outer disk has about 14.6 million times the mass of our Sun in what would be similar to the orbit of the Earth!

8. It’s almost as old as the Universe itself.

9. It’s part of the Virgo Supercluster, a group of galaxies within 150 million light years.

Everything in space, including the Milky Way, is moving. The Earth moves around the Sun, the Sun moves in the Milky Way, and the Milky Way cruises through space. The Cosmic Microwave Background radiation, radiation left over from the Big Bang, is used as a reference point to measure the velocity of things moving in space. The Local Group of galaxies, which the Milky Way is part of, is estimated to be moving at about 600 km/s or 2.2 million km/hr!